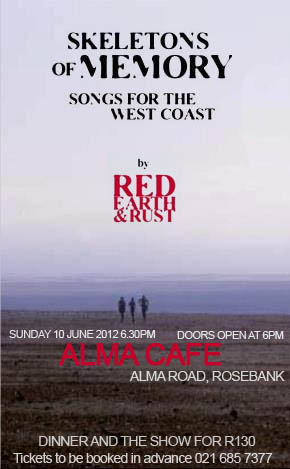 Skeletons of Memory: Songs for the West Coast

On Saturday and Sunday, 3-4 March 2012, Red Earth & Rust will be launching their third album, SKELETONS OF MEMORY: SONGS FOR THE WEST COAST, in the studio venue of the Fugard Theatre, Caledon Street, Cnr of Harrington Street, District Six, Cape Town. These songs are born of a long relationship with the west coast of Southern Africa from Yzerfontein in the south to the Kunene River in the north. They are written in a unique style that contains elements of folk, rock and African desert blues. They celebrate the harsh beauty of this region and evoke the different cultures - many now endangered or extinct - of those who have lived there.

In his lecture, The Secret Life of the Love Song, Nick Cave laments the one-dimensionality of most popular songwriting, especially love songs. These songs fail us, Cave says, because they only represent a fraction of the lover’s experience. In particular they shy away from sadness: “Songs that do not have within them an ache or a sigh are not truly love songs”, he observes.

Perhaps Cave overstates the case slightly: I can think of several optimistic love songs that always bring a smile to my face. But certainly even these tend to hold some kind of tension, some kind of gravitational force that pulls me in different directions at the same time.

In the written version of Cave’s lecture I found on the Internet (though not on the recording I have of it) he offers Lou Reed’s Perfect Day as an example of the alternative tradition of darkly brooding, complicated love songs he is championing. It seems to be a fairly conventional song at first, a recollection of a day spent together by two lovers in ideal circumstances. Towards the end, however, when the singer remembers: “Just a perfect day, / You made me forget myself. / I thought I was someone else, / Someone good …” Suddenly the perfect day of the song’s title becomes fleeting, ambiguous and hence memorable.

Cave’s own songs, mostly recorded in the company of his long-standing band the Bad Seeds, are often poised between apparently contradictory emotions, accompanied by an irresistible clamour that seems always on the point of becoming unhinged.

People Ain’t No Good, one of the strongest songs on 1997’s fabulous The Boatman’s Call, is less sonically demanding on the surface than most Bad Seeds compositions, but it is in fact one of Cave’s darkest songs, its corrosive power heightened if anything by the sparse accompaniment and Cave’s tenderly broken-hearted delivery.

As its title promises, People Ain’t No Good is an indictment of human frailty and imperfection. It chronicles the entire life of a relationship from its idyllic beginnings (a springtime scene with blossoms sailing down on the world) to its sad and apparently inevitable conclusion.

The effect of these lines, delivered in Cave’s trademark, slightly out-of-tune baritone, is devastating whether or not one agrees with the sentiments expressed in them. For a start, Cave inhabits the song completely, and when he almost misses the high notes, it is as if his voice echoes the sense of human beings overreaching their limited potential.

But the song’s greatest strength is the tension at its centre: it is meant to demonstrate that people “ain’t no good”, as if it was written in blame and anger, but by the song’s end, we are confronted with a vision of people who desire to be better, but regrettably cannot be. Cave’s voice has a rueful tenderness throughout, tinged with regret: one feels certain at every point that he includes himself in his estimate of humanity.

Songs like these might offer dubious advice, but they serve us because they push us into conversations with others, and crucially with ourselves. I’m smiling to myself as I write this, half agreeing, half disagreeing with Cave, tapping my fingers to the beat of a song which, without trying to, I have learned by heart.

There are so many songs about missing a place, of longing to be somewhere else. I just had Guy Clark’s Dublin Blues on my computer speakers for the first time, and I could tell by the end of the first verse that I wouldn’t forget it in a hurry. Actually I had heard the song before, sung by Townes van Zandt in a voice that managed to be both frail and compelling. Clark’s original version is slower, and you really feel the space after the place names – musical space, of course, suggesting geographical and emotional space between the singer and what he desires. “I wish I was in Austin”, the song begins, “In the Chili Parlour Bar / Drinkin’ Mad Dog Margaritas / And not carin’ where you are / But now I sit in Dublin / Just rollin’ cigarettes / Holdin’ back and chokin’ back / The shakes with every breath …” As with so many great songs of this kind, one realises early on that they aren’t so much about wishing you were somewhere else as that you were someone else, though there’s a note of defiance in this one too.

Songs have a particular way of organising time and space: for the most part they rely on rhythm, metre and rhyme to transform the chaos they speak about. As they are imprinted on your memory until sometimes you learn them by heart, they start feeling like places you can revisit and call home – no matter where you are.

Barbara and I have just moved house, and I asked myself beforehand what music I should keep aside from the madness of packing. In a sense I needn’t have bothered: I can hear Dylan’s Blind Willie McTell, walk into it in my mind, without having to find the appropriate disc. I can feel the spaces between the lines of the song, and the way the piano and guitar circle each other. There is a fury smouldering just beneath its surface, but when you listen to it or say the words out loud to yourself, what you get is a sense of place – a place in which you can breathe, which you can inhabit with another person or by yourself.

Of course Blind Willie McTell, like Dublin Blues, refers to many things outside itself: apparently people travel to the Texas Chili Parlour Bar from all over the world now and order Mad Dog Margaritas, only to be disappointed, because by all accounts it tastes like nothing on earth. But there’s more to it than that: songs do not only evoke places, they are their own places. They organise the world into a kind of emotional architecture, and each one has its own rules and independent existence. I’ll stumble on Dublin Blues involuntarily one day when its nostalgia and defiance are the last thing on my mind, and I will be forced, once again, to attend to it.

There are times – often times of emotional upheaval – when I find myself walking and singing absent-mindedly - singing measured, assured lines to steady myself. This has nothing to do with being a singer by profession: it’s simply a way of orienting oneself in a different kind of time and space. Listening to the measured chorus of Dublin Blues, that’s the kind of movement you feel – out of the shakes (of whatever kind) and into steadiness; the measurement of rhythm and metre that seems to promise that we can transform anything: “I loved you from the git go / I’ll love you till I die / I loved you on the Spanish steps / The day you said goodbye …”

I only saw Syd Kitchen perform live twice, both times in Cape Town, in late 2009. When he started singing, I immediately felt that his songwriting was of the highest order. And every time this happens for me with a local artist, I immediately try to place that artist in an international context.

Kitchen certainly deserves such a context – a position he shares with perhaps only a handful of local songwriters - and yet what struck me listening to him play his songs live was his South Africanness, and this sense has stayed with me as I have listened to the albums by him I have managed to find, the majority of which I had to buy from him personally because no major local shop seems to stock his albums.

Of course, many of his songs are explicitly topical in their subject-matter. Africa’s Not for Sissies, for instance, is a deceptively lighthearted song about living in a crime-ridden society like our own. But there is something else about Kitchen’s music that strikes me as particularly South African: his accent is unusual.

Other local singers have used accents to create characters – one thinks of David Kramer’s Tjoepstil, in which a white policeman with an Afrikaans accent is presented to us, someone Kramer knows would be ridiculous to his intended audience. The song then skilfully goes on to challenge such assumptions, but the important thing is that, to begin with, we know who this character is.

Kitchen’s accent works differently: it isn’t a parody of any particular accent, either black or white, but seems to have traces of many accents a South African person would have heard, settling in between them. And so when he sings in the title track of the wonderful Fool in a Bubble EP: “Here I sit like a fool in a bubble / My heart in trouble / My head in a mess …”, the song could be about dislocation and loss of innocence anywhere, but this accent suggests a South African slant.

This accent is also present in the music itself. So, for instance, listening the title track of Africa’s Not for Sissies, some listeners might conveniently assume that this is a confession by Kitchen himself, speaking as someone who has seen enough of this continent and knows that he can no longer stay here: “Can’t stay, I finally see / That Africa is not for sissies …” But the music itself complicates this impression: it contains guitar lines that powerfully echo Zulu maskanda music, and the PVC pipe (or hosepipe flute, as he called it) suggest a more hybrid identity for this speaker. The song’s disturbing content is undercut by the playful lyric: “I’m a ordinary man / I’ve got a life and a wife to keep / I’m a ordinary man / I take sixteen guard dogs with me when I sleep …” Throughout, Kitchen inserts statements at the end of verses (“yebo, yes”, “please don’t go”, said in an exaggeratedly refined English accent) until his audience feels – consciously or not – that their paranoia is shared across different social and ethnic divides, while still insisting that those divides are present.

Kitchen, who died in Durban about two weeks ago, famously described himself as an Afrosaxon by inclination. Listening to his multi-accented music, one of its greatest pleasures is its curiosity about different voices and positions – a curiosity that reverberates through the songs and leaves us with new ways of asking what it means to come from here.